Release management is required for new projects or even changes to an existing project. To prevent delays and last-minute issues with releases, we need to follow the release process systematically.

A specific release process from project planning to delivery

The definition of release standards, types, and requirements for the release process

Activities involved to deploy a release to production

Include many release units that have higher and critical business impact

Includes release units that do not include critical components

Design the release model based on the customer’s requirements. In the existing process checkpoints, validation and verification are not seamless. So, customized the release model to overcome these challenges. Here is the comparison table for the release process versions. 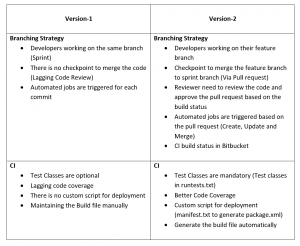 In version control systems, Branching is a technique that makes a copy of source code.

Once the developers complete their stories, they need to create a pull request from their story branch to sprint copy. The reviewer takes the responsibility to review and merge the code. 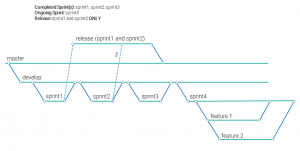 Once the developer has cloned their branch into local, they need to install the git-hook(pre-commit) script. It is used to track the current committed components in a text file called manifest.txt. Also, it generates the runtests.txt file. There, the  developer needs to maintain the related test classes to get the successful deployment.

Source control is the practice of tracking and managing changes to code. It provides the history of code development. Each version will be shown with the time and includes the person’s name when made the change.

Developers complete their tickets and create a pull request from user story branch to sprint branch. Once they create a pull request, Jenkins Dev-Int validate job will get triggered automatically. Reviewers will review the code and merge the pull request only when Dev-Int validate job gets success. Based on the job status, the reviewer starts to review the code and merges the user story copy into sprint copy. At the time Dev-Int deploy job will get triggered and the components present in sprint branch will get deployed to Dev-Int sandbox. QA validate job will get triggered once Dev-Int deploy job completes successfully. After the QA validation is ‘success’, QA person will request DevOps team to deploy the sprint branch components to QA sandbox. DevOps team will deploy and notify that to QA person about the success or failures. After completion of each sprints, they will be merged with the develop branch via pull requests. 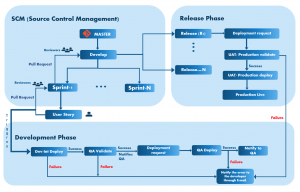 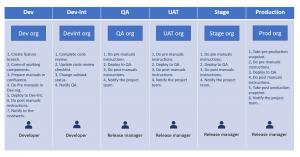 Release management presents a tremendous opportunity to drive continuous improvement in software delivery throughout an enterprise. It provides greater visibility and traceability throughout the release.

Introduction to Git and Jenkins

Git is the distributed version control system. It allows us to have “versions” of a project and tracks the changes made to the code over the time.

When a company seeks out an external solution to provide better customer experience, they’re putting their trust in their vendor to provide that solution.