In this article, let’s see the new trend in testing called “QAOps”. QAOps is a continuous testing strategy used when we need to deliver the software frequently. QAOps is a process for integrated testing and quality assurance during entire development and release phases.

In this article, let’s see the new trend in testing called “QAOps”. QAOps is a continuous testing strategy used when we need to deliver the software frequently. QAOps is a process for integrated testing and quality assurance during entire development and release phases.

QAOps is a process that can be used along DevOps and Continuous integration/Deployment. At every stage, testing will be done for usability, errors and for quality. Sometimes the traditional testing may cause major bottlenecks that might slow down development and release. Now with QAOps, this doesn’t happen. Magic of QAOps is its versatility. 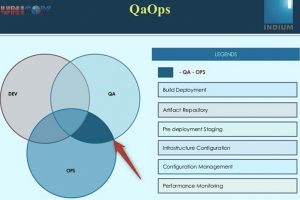 QAOps is blended with DevOps here. Deployment happens at continuous phase and Operations team does monitoring and configuration management. With Continuous development and Integration, the Continuous testing will be implemented.

Where do we use QAOps?

Testing of application can be done on any device or Operating system that we want it to be available on. It is not possible to say that automation will solve software testing problems 100%. At times, it may not be feasible at all. So, there is a need to blend QA properly.

QAOps does not discourage automated testing. It emphasizes the value of manual testing. The reason is that manual testing can give usability view and deeper information. Let’s see the methodologies used in QAOps:

When QAOps can be used?

QAOps is useful when specific types of testing are needed.

QAOps can be helpful in regression testing. To ensure that the update is released in a timely manner, QAOps can check for any new faults that might have been created by the new information being added.

If agile project management process is used, regression testing can be considered as something that causes unnecessary overheads. With the efficiency of QAOps, the concern is gone. So, QAOps can be integrated with development process as it allows to provide customer with best software.

For localization, QAOps is almost non-negotiable. When a software is designed, we need to know if it fits with that culture. If it doesn’t, then the app will fall short. QAOps allows to connect with testers in or near the location; so that we can see if software really connects or confuses.

QAOps is helpful to implement continuous integration; so that automated test can be regularly run and even can be outsourced to testers. Thus, QAOps strategy can be used to deliver the software faster, by ensuring the high quality of the product.

We have a scenario to assign the record owner to a Queue based on some criteria. The non-admin users are unable to view the value of the Owner field once the Owner field is updated with the Queue. We found the root cause for this issue. One of the features of the Spring 20 release (Require Permission to View Record Names in Lookup Fields (Critical Update) causes this issue.